View source
watch 01:36
We're Getting Mutants in the MCU - The Loop
Do you like this video?
Play Sound

This article is under construction. Please visit this page at a later date.

Breeding is a feature which is enabled for some pets. Those which can be bred can produce offspring of three or four varieties: Standard Alts, New Alts, Mixes, and Hybrids. Hybrids can only be obtained by breeding specific inter-species pairs.

Breeding can be used for both discovering new alts and mixes, as well as breeding rarer species and alts for sale.

Standard Alts are the alts that the pet can always be obtained in through hatching. For most pets, there are six possible outcomes.

New Alts are alts that can only be obtained through breeding. These are often flashy and colorful, or are patterns not normally seen on the species (i.e. tiger stripes on an Oncilla). These alts were colored by an artist and hard-coded into the system, so they will always appear the same when obtained. Before 2016 there were a seemingly random number of New Alts made for each species. Starting in 2016, newly introduced breeding pairs produce a standard of 10 New Alts.

Mixes are a combination of the parents' colors. Any two can produce a new mix, so there are somewhat infinite colors of Mixes. Two pets of the same color can be bred to create a mix, but they will appear the same as the parents. Mixes are generated by the site for each breeding, meaning even Mixes can be bred to produce even further mixes. Try experimenting to get a specific color or pattern combination!

The breeding feature can be found under Adopt → Shop & Purchase → Breeding. 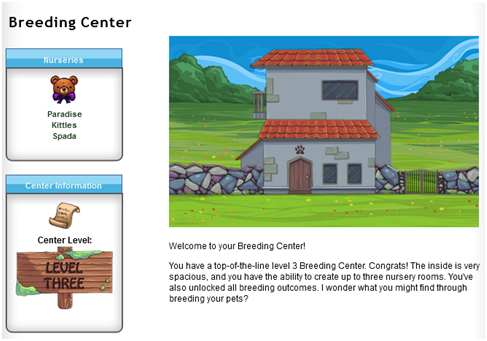 There is an unconfirmed assumption that Level One breeding can result in only standard alts, Level Two allows for results of new colors, and Level Three allows for mixed alts and hybrids.

You may have up to three nurseries, gaining one nursery each time your level increases. Each nursery can be named.

To breed you will start by clicking on one of your nurseries. These can be found in the top-left corner of the breeding screen. By default, all nurseries will be called "Nursery," so renaming them is useful if you don't want to forget which nursery is used for!

You will then select whether you are breeding with ZP or ZC by using the provided drop-down menu. This is rather small and can be located beneath the cat picture. Proceed by clicking Choose Currency. If your selected nursery already contains a breeding pair, you will be brought to that screen instead.

When you select the currency a new list will appear consisting of pets breedable with that currency. The list will only include breedable pets that you have, so if you do not own any of a species it will not show up in the list. Select which species you would like to breed and then click Choose Type. If you do not have one pet of each gender you will get an error message stating so. If this happens, go back to the currency selection screen.

You are then taken to a menu where all of the eligible pets of that breed are listed. Males are on the left and Females are on the right. If the pet can be bred with a different pet to make a hybrid, those pets will also be listed. Select one pet from each gender and then click the Breed button.

You will then be asked to confirm the breeding for the listed price.

After confirming the breeding it takes between 3 and 5 days for the pair to produce offspring. This is determined randomly, so be sure to check back often as once the egg(s) are ready you only have 24 hours to claim your eggs. If you do not claim them in time they are sent to the Abandoned Room. You can hunt for them every weekend or try posting in the forums and sometimes someone can rescue an egg for you. If you don't want to wait you can spend 3ZP on an elixir and your eggs will be ready within the next hour.

Breeding will produce between 1-4 random eggs. A hybrid is not guaranteed if you attempt to breed for one.

The following pets are breedable.

The following hybrids can be obtained by breeding the associated pets. Parent animals can be bred in any combination, as long as one of each required animal is present. Total cost is calculated as the sum of both parents' breeding fees.

It is suspected that you may need a level 3 breeding center before you can get hybrid pets as a breeding result. Not all breedings will result in a hybrid.

Some hybrids are themselves breed-able, as indicated in the last column.

Community content is available under CC-BY-SA unless otherwise noted.
Advertisement